Santorini: The Best of Oia and Fira Shore Excursion

Santorini was formed 3000 years ago when the volcano erupted and split the island in two, creating the landmark of the Caldera. The island is a natural beauty, and our shore excursion will explore its unique architecture and local charm. Take a look at our Santorini Shore Excursion.

Santorini is probably the star of the Cyclades island, hence the busiest, with its white houses with blue doors and windows overlooking the deep blue sea, surrounded by a starry sky. Naturally is also famous for its own active volcano. This is considered one of the most romantic places in the world, where couples come to enjoy their honeymoon. Avoid the crowds and join our shore excursion in Santorini!

Taking the boat from the old port to the new port, we’ll begin our Santorini shore excursion at Oia.

Oia is undoubtedly the side of Santorini you’ve seen numerous times in photos and on television. With whitewashed walls, and blue domed roofs, the buildings here must be seen to be believed.

It’s not just for aesthetic reasons that the houses are white. They are painted in white lime water so that rainwater runs off the surface and can then be collected. It’s also said that during Ottoman rule, flying the Greek flag was forbidden. In response, the town painted itself white!

From Oia, we’ll enjoy the view of the volcanic bay and of the islands themselves. Feast your eyes on this town built directly into the rock, it’s small roads and streets entangled in a maze of white stone. A real paradise.

After the guided tour of Oia, our Santorini shore excursion will drive for 30 minutes to the small village of Fira. Here we will meet the typical white – constructions which characterize Santorini and all the Cyclades islands.

Getting lost in the alleys and narrow streets which characterize the village we will have the chance to enjoy wonderful and unique landscapes.

Finally, we’ll take the cable car back to the port for boarding.

If your are looking for Santorini Shore Excursion , book now the best guided tours at lowest price with Ancora Tours. Since 2003 we offer you official guides in english, transportation and travel insurance, all included. The highest quality at the lowest rates. 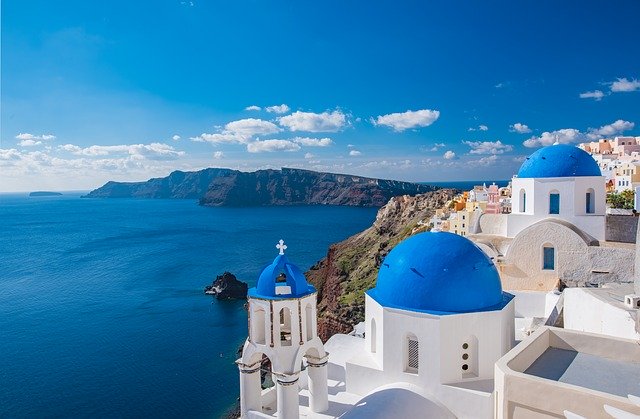